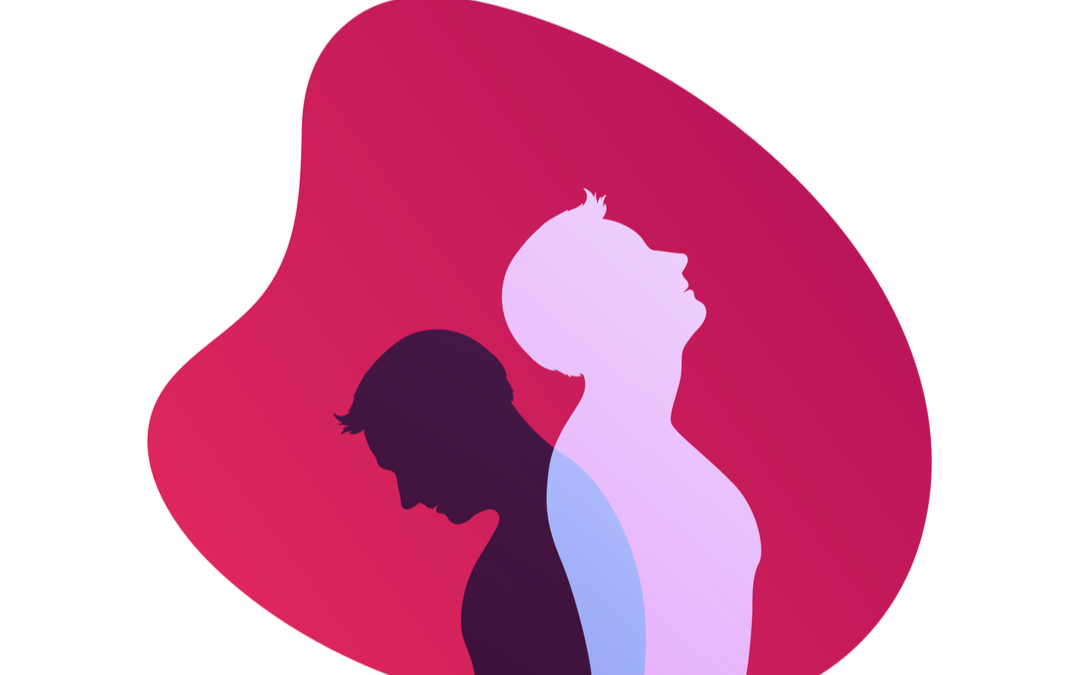 We are now living in a world where trauma has evidently been experienced in masses. Besides the many incidents that can be traumatic to individuals on a daily basis, the COVID-19 pandemic has only added to the stress. With trauma comes lasting effects, and it’s important to understand that some people can suffer effects long after the trauma itself has subsided – this is called PTSD (Post-traumatic stress disorder). Trauma permanently changes us. This is the big, scary truth! There is no such thing as “getting over it”. The five stages of what is called a grief model marks universal stages in learning to accept loss, but the reality is in fact much bigger: a major disruption leaves a new normal in its wake. There is no going “back to your old self”. You are different now, full stop. PTSD  is real and PTSD therapy can be life saving.

Samir (name changed), a middle-aged HR professional was living in Bangalore, Karnataka till March 2020. His wife was diagnosed with stage 4 cancer in January 2020 and the doctors gave their words for her treatment. He, along with his family, decided to relocate to their hometown as soon as the news of COVID-19 started spreading so that the last stretch of his wife’s life journey remains peaceful in the presence of loved ones. During the endless cumbersome treatment procedure at the hospitals while still trying to help his wife fight cancer, he contracted COVID-19. It happened in July 2020, a time when the entire country of India was under strict lockdown. The 14-days of institutional isolation at a hospital, detached from his dying wife and young children was an immensely painful experience for Samir. He kept his hopes high throughout but in August 2020, his wife passed away. It was hard for him to accept: the several nights at the ICU, waiting for hours at the hospital lobby, the typical smell of the hospital, wearing PPE kit in the scorching heat left a trauma in Samir’s mind. He was unable to sleep, he refrained from having proper meals, he couldn’t get away from his wife’s belongings, he found it extremely tiring to continue to work, he kept pushing himself looking at his elderly parents and young children.

Most people will experience a range of reactions following a traumatic experience, yet most people recover from initial symptoms without the need for any medical intervention. Those who continue to experience problems following trauma may fit into a diagnostic entity called PTSD.

People with PTSD experience a range of pathological and anxiety-provoking emotions even when there is no danger around. Unlike most people, Samir started experiencing a wide range of physical pains such as pain in his cuff muscles, in his neck and shoulder, sudden sleep difficulties and frequent nightmares. Despite having a strong support system, his physical pains were not going away. He consulted a physiotherapist first, followed by a neurologist but neither could find a specific reason behind his physical pains. A consultation with a neuropsychiatrist confirmed the possibility of PTSD, or post-traumatic stress disorder. He was suggested psychotherapy. 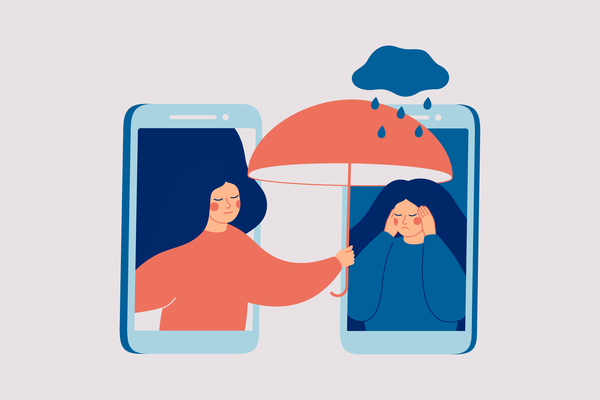 When he came for his online consultation, he was apprehensive and was still in shock to believe that his symptoms could be a result of his struggle fighting for his wife’s treatment. It was almost after one year; he spoke about his wife to anyone. From the time he lost his wife, and recovered from COVID-19, he refrained from sharing his experience with anyone. He always believed that if he breaks down, it will impact his children and his elderly parents. But holding onto the memories started resulting in physical symptoms which couldn’t be otherwise categorized with a physical reason.

The kind of symptoms exhibited by Samir was different from typical symptoms of PTSD but the truth is that’s what trauma does to us in the long-run. The memories may fade with time but the flashbacks and nightmares remain. The memories are so distressing that people start avoiding conversations, and places associated with the trauma. It changes one’s mood: while grief is a more prominent reaction, other emotional changes like low mood, guilt, and irritability become more prominent.

PTSD is often associated with profound changes in the autonomic nervous system, in particular an increase in activity of the sympathetic nervous system (the adrenaline system underlying the “fight, flight, or freeze” reactions) and a deficit in the parasympathetic nervous system (the “rest and digest” system). When it goes untreated, PTSD can last for decades. People with PTSD cannot “just get over it” and in some cases, PTSD can be pernicious and insidious and can get worse rather than better over time. PTSD leads to substantial distress and disruption of social and occupational functioning.

PTSD therapy is possible and a wide range of effective treatments for PTSD exist. Depending on the nature of the trauma, these include:
(1) Pharmacological interventions by Psychiatrists (including SSRI, SNRI, and antidepressants)
(2) Forms of cognitive-behavioral psychotherapy involving ‘emotional processing’ of the trauma. (3) Prolonged exposure therapy
(4) Eye-movement desensitization and reprogramming (EMDR)
(5) Trauma focused CBT
(6) Interpersonal therapy
(7) Person centered therapy
(8) Mindfulness-based therapies

For Samir, a combination of pharmacological and psychotherapeutic intervention was chosen to combat the symptoms. The medications were primarily to allow him to sleep better at night and take better control over his mood.

For psychotherapy, the step was to focus on allowing one to grieve. Grief is an extremely personal and deep experience. Several sessions were conducted to allow Samir to grief at the comfort of his therapist. The acceptance of the life after his wife’s demise is painful yet a harsh truth! The importance of having a non-judgmental ear to listen to his day-to-day struggles was emphasized. People tend to believe that grief shrinks with time, but the truth is people grow around grief. Supportive psychotherapy along with mindfulness-based interventions using metaphors to work around acceptance was applied. 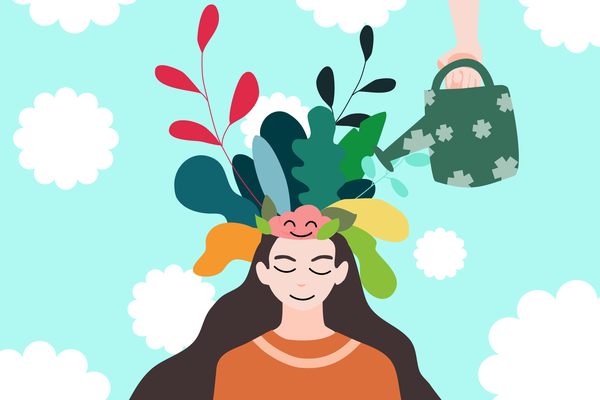 Depending on the nature of the symptoms, Cognitive Processing Therapy can be implemented which focuses on how one’s traumatic event is perceived and how one tends to cope with the emotional and mental part of the experience. Together collaborating in processing the traumatic event or memories and working through the ‘stuck points’ (certain events or thoughts or memories or flashbacks related to the trauma that are preventing recovery). Similarly, EMDR is often used with survivors of trauma, for e.g., after a deadly life-threatening accident.

Stories such as that of Samir tell us that a range of mental health concerns are in the offing thanks to the ongoing pandemic. COVID-19 and the loss of near ones can affect the brain and produce distressing neuropsychiatric symptoms. With early diagnosis and evidence-based treatments there is a chance to lessen the negative effects and restore health and well-being.

If you or a loved one has gone through a traumatic experience and are experiencing unexplainable physical pains, change in eating and sleeping patters, and waning mental health systems consult with a Psychotherapist. As mentioned above, a professional will be able to diagnose you appropriately and start treatments to help you cope through your trauma. PTSD therapy or therapy for any mental health concern is often a taboo subject, but your mind can be as vulnearble as your body. You should prioritize both.

You’d go to a professional if you had a physical injury right? Well, your mental health should also be of equal priority. MFine’s 2-Month Mental Health Care Plan gives you the ease of flexibility and quality treatment quickly. The customized program designed for you will help you acess advice on daily care along with therapy sessions. The plan also includes daily supervision and assessments so you know your progress.